Fanad Lighthouse on the north coast of County Donegal is one of the most photographed lighthouses in Ireland and it is easy to see why – it is in a beautiful location and is easily accessible. I’ve been anxious to add it to my (neglected of late) project of Irish lighthouses photographed while they are actually emitting light, something they will probably not be doing for much longer as lighthouses are essentially anachronisms in this age of GPS.  (See  johnfinnphotography.com/gallery )

I eventually got around to heading to North Donegal a couple of days ago. It’s a long journey from the deep south. I had to drop my son off in Galway on the way and the traffic congestion there caused by the annual race meeting added to the total journey time of 8 hours (including a stop for lunch). I stayed in the little town of Downings, 20 minutes from Fanad, at Downings Bay Hotel where an excellent double room cost me €65 including breakfast. (My thanks to Cork photographer John Hall for the accommodation recommendation.) I had assumed there would be plenty of B&Bs in the general vicinity but that is not so. Either of the two hotels in Downings would appear to be the best option for anyone thinking of going there and staying overnight.

I checked in to the hotel and then headed straight for Fanad. As I mentioned, the lighthouse is very accessible – just step over a small wire fence and the magnificent vista is right in front of you. Access to the building complex itself was not available but this is due to change shortly as the Commissioners of Irish Lights in conjunction with Donegal County Council and the Irish Tourist Board will be opening it to the public. Some of the buildings are being converted to holiday accommodation – surely a prime place to stay for photographers eager to explore this picturesque area for a few days.

A satellite view of the lighthouse and surrounding area

It was obviously due to the preparations for the imminent opening of the complex that there was a White Van Man present. He was busy hosing down the area around the buildings and I dearly wished that he would finish up as his prominent vehicle was not what I wanted in any of my photographs. He didn’t oblige until 9:30pm, just before the lighthouse started flashing but at least he was gone by then.

The white van marring what would otherwise have been a nice photo.

I spent some time experimenting with various perspectives from the promontory on the left while waiting for sunset at 9:39pm which would prompt the operation of the light. 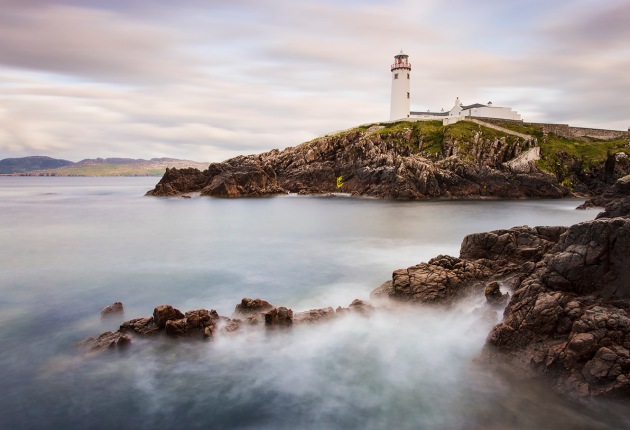 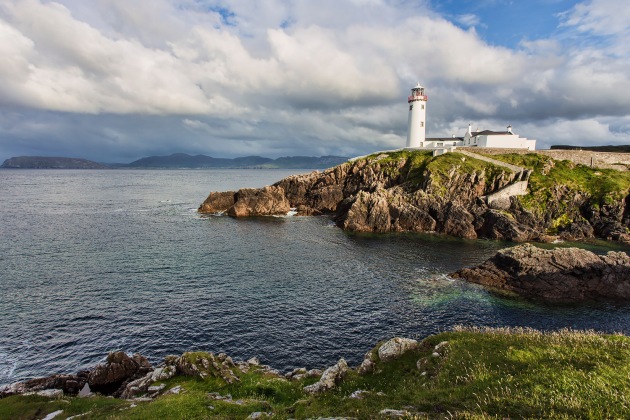 At around 9:30pm some other photographers arrived – clearly on a similar mission to myself – and within a few minutes the lighthouse began to flash. For the next 45 minutes I made several exposures, the time for each increasing as the daylight progressively faded. Finally, having more than enough “in the bag” I collapsed my tripod and packed up my gear. As I walked the short distance back to the car it began to rain. I was very lucky. I could have gone all that way and been rained out.

It is a place I would love to go back to and I would especially like to photograph it when the sea is stormy. A word of caution though: a County Antrim photographer was swept into the sea and drowned in 2014 while taking photos here in just such conditions. We can often take silly chances for the sake of “that special shot”. That particular tragedy and similar ones around the coast in more recent times should teach us to be extremely careful where the sea is concerned.