One of the most awesome sights one can observe is the arc of the Milky Way on a night when the sky is clear, when there is no moon visible, and when one is well away from the light pollution of cities and towns. Once you are in such a location in such conditions you will notice a faint band of light going across the sky. In late summer in the Northern Hemisphere it stretches from the southern horizon to the North East. (Be aware that it will not look as dramatic and as bright as photographs of it would suggest. Photographs are taken using a typical exposure time of between 25 and 30 seconds and are thus able to capture far more stars than are visible to the naked eye. Photographers also invariably boost the contrast and colour for pictorial effect.)

The Milky Way is the name of the galaxy in which we reside. It is just one of an estimated 100 billion galaxies in the Universe. It contains something between 100 and 400 billion stars and is about 100,000 light years in diameter. Our solar system is located within a minor spiral arm of the galaxy, the Orion Arm, and is about 27,000 light years from the centre. When you look towards the southern part of the Milky Way you are looking towards the centre of the galaxy whereas towards the North East you are looking in the direction of the outer edge. Here endeth a very elementary astronomy lesson.  I would strongly recommend that you refer to the numerous astronomy websites for more detailed information.

From a photographic point of view the technique involved in photographing it is straightforward and is well within the capabilities of all DSLRs and more advanced compacts. A tripod is essential of course as the shutter speed needs to be between 25 and 30 seconds. Anything longer than 30 seconds will cause the stars to streak due to the rotation of the Earth. A high ISO is required – typically 3200 or 6400 ISO although you may be able to get away with 1600 if your camera doesn’t extend beyond that. The higher the ISO the greater the amount of digital noise but this can vary from camera to camera. A full-frame sensor camera will generally have much less noise than an APSC or smaller sensor one. Noise can be reduced at the post-processing stage – Adobe’s Camera Raw has a very good noise reduction feature and plug-ins like Nik Software’s Dfine2 and Topaz Labs’ DeNoise5 also do a very good job.

You will need a wide lens to capture as much of the spectacle that you can (although homing in on a section of it with a longer lens can be very effective too.) And use it wide open, at its maximum aperture. In the photographs below I used a Canon 15mm f/2.8 and a Canon 17-40mm f/4 at 2.8 and 4 respectively on a full-frame Canon 6D.

You will not be able to use automatic focus and this can prove to be a problem if you arrive at your location in darkness. What I do is focus on an object on the horizon while the light is still relatively bright and then set the lens to manual: I know then that the focus is on infinity. The disadvantage is hanging around until it gets really dark. Manually focusing on a bright object using Live View may be an option but in my experience it has proved to be unsatisfactory. Don’t rely on just setting your lens to infinity without focusing on something – it will invariably not be accurate and the stars will appear as blobs rather than points of light.

Remember that it should be a moonless night. You might be able to get away with a moon if it is in either a Waxing or Waning Crescent phase but anything bigger will result in too much light in the sky. I use the Sundroid app on my phone to determine the phases of the moon and when it’s due to rise and set. The Photographer’s Ephemeris is another such one that I use.

Exposures will have to be bracketed to get the best results from your equipment but the essentials are: ISO 3200-6400, 25- 30 secs, wide open aperture.

And don’t forget a good torch to find your way back from whichever dark-sky spot you’ve chosen. 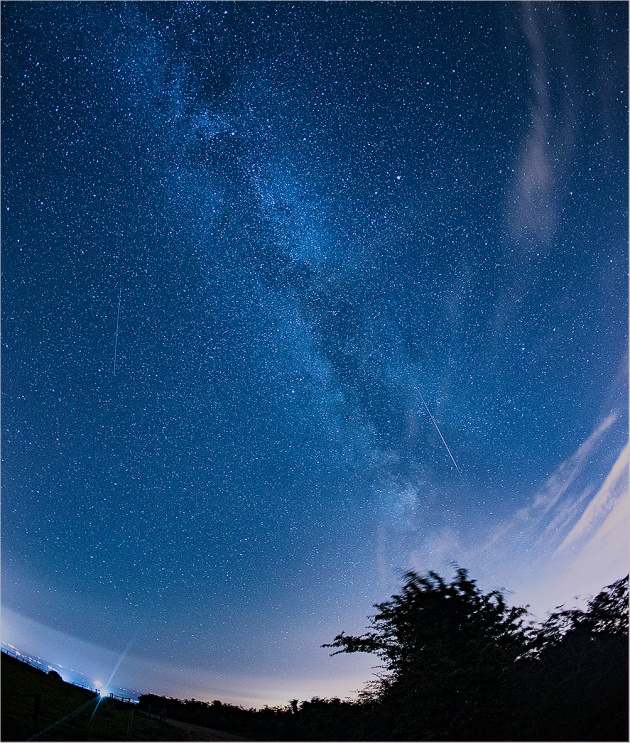 This photograph, taken not far from my house, and looking south, shows the unfortunate effect of light pollution (in this instance from the towns of Carrigtwohill and Midleton in East Cork). To the naked eye the light wasn’t particularly obtrusive but the exposure of 30 seconds has amplified it significantly. The streaks of light in the sky are meteors – the photo was taken on 13th August during the peak Perseid Meteor Shower period.

Another photo from the same location this time looking north-east . The streaks are a combination of aircraft and meteors. Again the light pollution is evident even though it was barely discernible to the eye. In both of these photographs I was using the Canon 15mm fish-eye and I chose not to correct the perspective, hence the curved horizons.

Why did I choose that location when I knew the downsides? It was a last minute thing – a break in the cloud and proximity to home. At least I got to see some meteors.

The following night, the 14th August, resulted in much better settled conditions – a nice clear sky from early evening. I therefore made my way to Ballytrasna Cove near Ballycotton.

Ballytrasna Cove is a secluded cove on the Ballycotton Cliff Walk.  It is good for Milky Way photography in that (in summer at least) you are shooting due south and it is hidden – well, mostly –  from the lights of Ballycotton Village and Lighthouse to the east and Whitegate and Cork City to the west. It is not as pure a dark-sky area as parts of West Kerry perhaps but it is the best place I know in East Cork.

At 10:22 the International Space Station came into view and it is represented here as a streak of light due to the 20 second exposure (it wasn’t yet totally dark, hence the shorter exposure time).

A few meteor streaks are visible.

The streak of light on the lower right is the Aer Lingus flight from London on its descent to Cork  Airport. Underneath it to the right is the light from the Old Head of Kinsale lighthouse and the broader glow on the right is from Cork City. A meteor streak is visible in the centre of the frame. The bright glow on the left horizon is, I think, from the Kinsale Oil Platform.

So, the technique in photographing the Milky Way is fairly straightforward and in the post-processing of these images I have confined myself to basic exposure, contrast, colour temperature, and sharpening adjustments. Nothing esoteric or convoluted. Such photography therefore is within the capabilities of anyone with the appropriate equipment. The only problem, given our climate, is getting the right weather conditions.