Into My Heart An Air That Kills

What Are Those Blue Remembered Hills

What Spires, What Farms Are Those?

Those words by that most melancholic of poets, A. E. Housman, always remind me of my early childhood in the Ireland of the 1950s, where we lived in a little cottage, near Ballymacoda, County Cork, in the townland of Warren, overlooking the sea, and Ballycotton Island.

(Click on the photos to see them in larger size)

It’s been more than 50 years since we lived there and yet the fields and houses, the boreens and pathways, the streams and seashore  have that special resonance for me that the landscapes of all our childhoods invariably have. Their imprint remains for the rest of our lives.

And so, whenever I drive the coast road from Mullins’ Cross to Knockadoon and back via Ballymacoda the past intrudes into the present around nearly every corner.

A few miles from Mullins’ Cross I pass Motherways’ house where my mother worked in the 30s and 40s. The Motherways were farmers and my mother worked as a domestic, doing household chores and looking after the young Motherway children. One of her abiding memories of her time there is of being told of the outbreak of war in September 1939.

A few miles further on I come to where our cottage once stood. It has long since been transformed into a modern bungalow but I can still see my grandfather Jamesy Pomphrett standing by the half-door and the rooms and their furnishings are still clear to me now: the slate tiles on the floor; the dresser with the good ware; the settle; the fireplace and the fire machine; the outside water pump with the large iron handle.

The cottage photographed circa 1974. Jamesy Pomphrett lived there until his death in 1976.

The cottage as it is now (picture from Google Earth).

In the foreground is The Acre which I remember my grandfather ploughing with a couple of horses.

Sometimes I park the car nearby and I take a stroll down the boreen towards what was Eamon Walsh’s house, uninhabited for decades and now used for storing feed for livestock.

I wander around the derelict house and farm buildings and I remember how I used to play here with the Walsh’s children.

There is no shouting and laughter to be heard here now, only the sound of the wind whistling around the walls and windows. I feel like a ghost as I explore what remains of the rooms.

From Walsh’s I walk across the fields towards the cliffs and I look across at Ballycotton and the island. In my mind’s eye, the “Innisfallen” hoves into view from behind the island making its way from Cork to Fishguard. The boat used to hug the coastline back then. On board is my father returning to England, to Fords of Dagenham,  after a short holiday at home. We used to light a bonfire in this very place to signal our presence to him as the boat passed. In those days our emigrants went by sea.

The “M.V. Inisfallen”. It carried thousands of emigrants to England and many (most?) of them never returned.  My father did, in 1961, and we –  my parents and sisters and I (my grandfather stayed in the cottage) – moved to Youghal. My parents had contemplated moving the family to London.

I make my way down the cliffs to the strand, a place called The Cow. This is where I used to go with my mother as she picked perriwinkles and carrigeen moss to earn some money in those lean and austere years of the fifties. I would sit in the sun by the side of The Lios (a Fairy Fort) or explore the rockpools  as she worked.

The wall, built in the 1940s, has successfully weathered the storms over the years with only minor portions breaking away.

At the Garryvoe end of The Cow, “The Tadorna”, a ship bound from from Rotterdam to Cork, ran aground in November 1911 with no loss of life and was deemed unsalvageable. Its general cargo found its way into houses in the locality.

Another photo of the Tadorna courtesy of Mr Toddy Lawton

All that’s left of “The Tadorna” today.

The mound on which the timber house stands is known as “The Lios” – an Irish word for Fairy Fort. In 2004 local artist and writer Jools Gilson-Ellis staged an installation titled “The Lios” at the Crawford Art Gallery in Cork and at the Phoenix centre in Exeter . Part of the installation consisted of recordings of  local people, including my mother, reminiscing about the Lios and the area.

From the shore I walk up the path towards Lawton’s old farmhouse. At the top of the path, on the left, is part of a field where a couple of  houses used to be. I vaguely remember them. Helen McCarthy, a childhood friend of my mother’s, was reared in one of those houses. She was a feisty and fun girl according to my mother who remembers her with great affection. She later went to America but returned and married Jimmy Mullins of the aforementioned Mullins’ Cross near Garryvoe. It is sad to think that people loved, lived and played in this very spot and nothing, not a brick nor a stone, remains to stand testament to it.

And as I near what was once Lawton’s house I imagine Tom and Molly coming out to greet me, Molly, as ever, with a cigarette dangling on her lip. There is where the dairy stood, where the cows used to be milked by hand and where the farmyard cats used to get a squirt of milk in the eyes if they greedily ventured too close to one of the milkers.

This is where I made Farmer’s Butter in a wooden tub under the expert eye of Molly. I can still feel the ache in my hand from turning the handle – easy at first and then more difficult as the cream thickened.

My sisters and myself were regular visitors at Lawtons. In those days before television, card playing was a regular occurrence in the evenings. And I remember once how my older sister and myself made our way home across the fields. It was a beautiful night in late summer, I took off my shoes and walked barefoot in the dewy grass, and as I looked up a full harvest moon was rising over the field above Eamon Walsh’s.

Lawton’s house was the second one on the right

One dark winter night my mother took me along a path through some fields until we came to an old iron gate. As I climbed up she told me to look to the northern sky and there we saw the dancing, glimmering lights of the Aurora Borealis. I often wondered if I’d imagined this until a friend of mine confirmed that in 1958 the Northern Lights were observed this far south.

Further up the road is Smiddy’s farmhouse, again, now, empty. Here in the haggard I remember the noise, the smell and the chaff, and the general hustle and bustle, as a threshing machine separated the grain from the stalks and husks of corn one harvest evening. 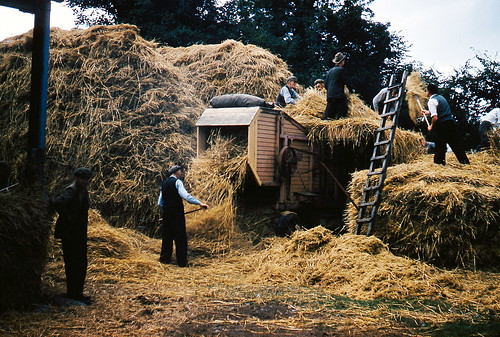 A typical threshing scene in Ireland in the 1950s. This one was in Inchigeelagh, County Cork.  Photo by Aubrey Higgs (via Textlad)

Across the road is the boreen down which we travelled in a horse and trap to Ballymacoda for Sunday Mass.

Further on again is Kilmacdonagh School, now another storage space for a farmer. This is where I first went to school – by bicycle – and learned my lessons from an old, severe woman called the Col Aherne.

This used to be the playground of the school.

Update 26th May, 2015: I returned to the school yesterday and with the kind permission of the owner I took the following photographs:

It’s all so long ago, and I think about time, and finitude, and the passing of time, and of the people who lived around us – Tom and Molly Lawton, Eamon and Chrissie Walsh, Dave Carty, John and May Smiddy, the Colberts – all of whom are now hidden amongst the stars – and the way of life that has disappeared, and the changes that time has wrought.

“Time”, said Marcus Aurelius,” is a river, and strong is its current; no sooner is a thing brought to sight than it is swept by and another takes its place, and this too will be swept away.”

As a small child I was too involved in experiencing the world to have such melancholic thoughts but, of course, I too was a prisoner of time. Dylan Thomas, ìn “Fern Hill”, expressed it well:

Time held me green and dying

Though I sang in my chains like the sea.