David O’Riordan is an artist based in Ladysbridge in East Cork.  He is an accomplished iconographer  who will shortly have an exhibition of his work at the Cork County Library, County Hall, Cork (27th March – 26th April) with two Greek iconographers, Nikolaos Griniexakis and Eftychia Ilia. A native of nearby Midleton, he is also the Roman Catholic Parish Priest of Ladysbridge and Ballymacoda in the Diocese of Cloyne.

I became aware of his work while doing photography for the Ordination Service book of William Crean who became Bishop of Cloyne on 27th January. I was asked to photograph one of David’s icons– of Saint Colman – that is on the wall at Cloyne Church. I was so struck by the beauty and professionalism of the image that I texted David to say so. A few days afterwards he asked if I’d mind photographing some of his other icons at his home in Ladysbridge as they were required for the County Library exhibition.

As I expected, the icon of Saint Colman was no fluke. Here was a collection of beautiful icons in various sizes and done to the highest standards of the genre. Icons are religious images more commonly associated with the Eastern Orthodox tradition than Western Christianity. The word iconography itself is from the Greek words for “image” and “to write”. The convention is to say that an icon has been written as opposed to painted as the artist, in producing an icon, is writing a religious story in picture form.

To those of us more familiar with traditional Western art icons can appear strange. They lack the three dimensional quality so familiar in paintings since the Renaissance. This is deliberate. They are not meant to be naturalistic. Instead they are replete with rich religious symbolism that has changed little in over 1,000 years. Colours, for example, are used to signify The Radiance of Heaven (gold), The Divine Life (red), Human Life (blue) and The Uncreated Light of God (white).

So, for example, Jesus is often depicted wearing a red garment underneath a blue one to symbolise God become Man whereas the garment colours are usually reversed for the Virgin Mary (a human gifted by God). Neither do they comply with the compositional conventions of more traditional art where the subject is usually off-centre: in icons the subject occupies the very centre of the frame in order to underline the centrality of the sacred presence.

The faces look odd to us too. This is also to do with symbolism. Eyes tend to be larger than natural, for example, in order to symbolise the spiritual eye looking beyond the material world. Likewise, the mouth is usually depicted much smaller than natural as it is often the source of empty or harmful words.

David working on an icon

They are painted – written – using another ancient method: egg tempera – a permanent fast-drying paint made with coloured pigment mixed with (free-range) egg yolk and purified water. This was the standard method of painting up until the 15th century when oils became the norm. Again, the very medium used underlines the traditional nature of the craft. And “craft” is used advisedly as there is little or no room for self-expression in iconography. Adherence to the tradition is paramount and icons are rarely if ever signed whereas our modern understanding of art is primarily one of the artist expressing himself or herself.

In contradistinction to the formality and asceticism of his iconography David’s other art is abstract and wildly colourful and executed through the voluptuous medium of oils. It is hard to believe that it is the work of the same person who produced the icons. Here we are very much in the modern era with influences as diverse as Georgia O’Keeffe and Salvador Dali being evident.

One could say that his iconography and his modern-influenced art represents the sacred and the secular except that a religious sensitivity can also be detected in his modern paintings. Not in any conventional sense, of course, but a mystical reverence for the underlying nature of things can be detected in his work. Which, of course, given the man’s religious vocation, is not at all surprising. 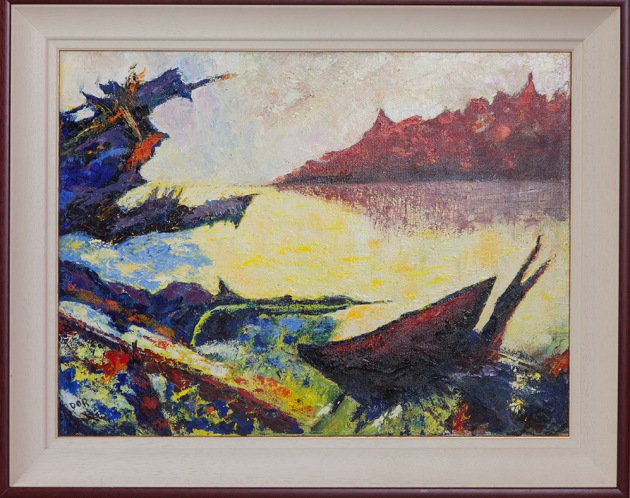 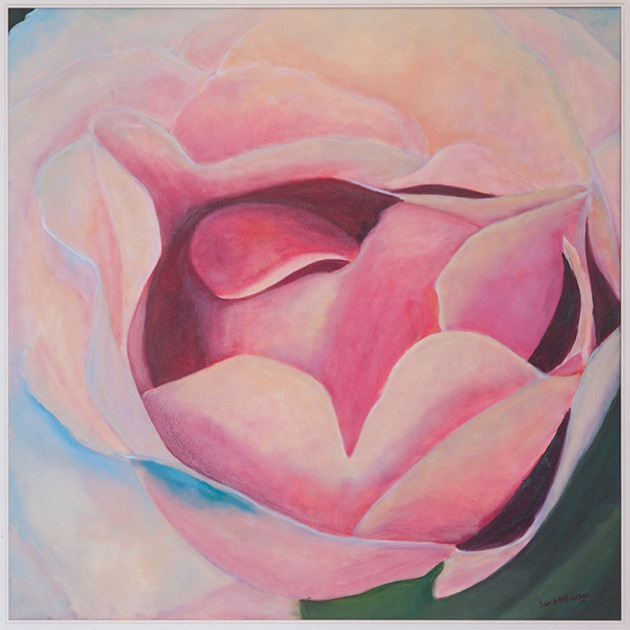 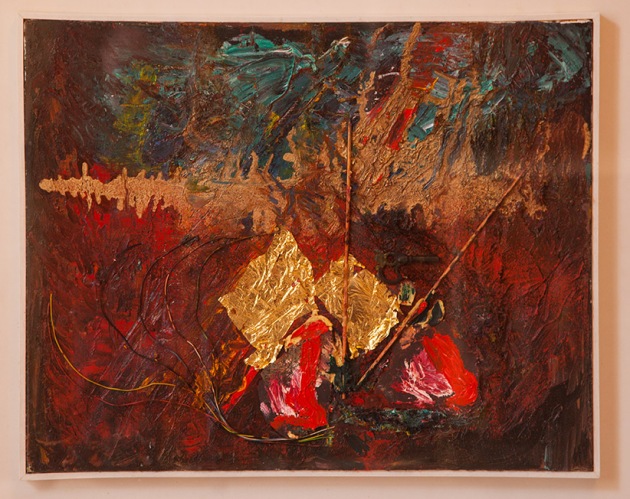 Obviously, David O’Riordan is no mere Sunday painter. Which prompts the question: why haven’t the general public  been given greater opportunities  to see his work? Apart from the forthcoming County Library event the only other exhibition he has held (of icons) was in Ballyvourney years ago when he was curate in Macroom (he has also served in Castlelyons, Cobh and Clondrohid.) Certainly, his non-icon work  deserves to be seen as well and one hopes that he will consider an exhibition in due course.