Czeslawa Kwoka (pron: “Ches-wah-vah Kvoh-kah” ) was born in the village of Wólka Złojecka in south-eastern Poland, about 64 km from Lublin, in August 1928. She died in Auschwitz in March 1943.

These photographs of her appear on the wall of Block 6 at the Auschwitz Museum. They were taken by a Polish professional photographer, Wilhelm Brasse, himself a prisoner, probably in late 1942 or early 1943. In 2005, Brasse recalled photographing Czeslawa: “She was so young and so terrified. The girl didn’t understand why she was there and she couldn’t understand what was being said to her. So this woman Kapo (a prisoner overseer) took a stick and beat her about the face. Such a beautiful young girl, so innocent. She cried but she could do nothing. Before the photograph was taken, the girl dried her tears and the blood from the cut on her lip. To tell you the truth, I felt as if I was being hit myself but I couldn’t interfere. It would have been fatal for me.”

Czeslaswa could still be alive today were it not for her being visited by such unspeakable evil. She would now be in her late old age, her long life behind her, comforted and cared for by her family.

Instead, a few months after arriving in Auschwitz, this beautiful girl was dead. It is not known how she died. It may have been starvation, she could have been shot for some misdemeanour, or, when she was no longer fit for the back-breaking work she was forced to do, gassed and her body burned in a crematorium.

The entrance to the Auschwitz camp with the cynical sign “Arbeit Macht Frei” – “Work Makes You Free” – over the gate.

The Auschwitz-Birkenau museum is about 60kms west of Krakow. It is one of the two “must-do” trips for anyone visiting the city which is among the most beautiful in Europe. (The other attraction is the Wieliczka Salt Mine, also, like Auschwitz-Birkenau, a UNESCO world heritage site.) This is not to demean the significance of Auschwitz-Birkenau by reducing it to just another sight to see on the tourist itinerary. It is a compelling place, THE symbol of The Holocaust, and you would not be human if you were not affected by what you would see and hear there.

I had been to Auschwitz-Birkenau 35 years ago and I was wondering how it had changed in the meantime. There have been reports of conservation and funding problems and I seemed to recall suggestions that it was actually sinking into the ground on which it was built. None of this was apparent on my recent visit. The buildings in Auschwitz looked as substantial as ever while the Birkenau part of the complex, a 5 minute drive away, was as I remembered it. There are relatively few extant buildings in Birkenau as most of them, unlike as in Auschwitz, were built of wood and were burned by the Germans before The Liberation. The foundations and brick and concrete parts are still extant for the most part.

You can only visit with the accompaniment of a guide. You are supplied with a headset and receiver – an innovation from my last visit – which allows the guide to speak in a low voice and yet everyone in the group is able to hear. This helps to maintain the overall hushed tone which, given the content of the narration, the exhibits, the pictures and the photographs is entirely appropriate.

Shoes taken from prisoners on arrival.

Photos of some of the women prisoners. The Germans stopped photographing prisoners after 1942 as they were unrecognisable due to starvation after a few months. Note that their hair was shorn on arrival. It was used to make “hair-cloth” which was used for various purposes including the lining of German Army coats.

A chamber where the bodies of gassed prisoners were kept before burning. 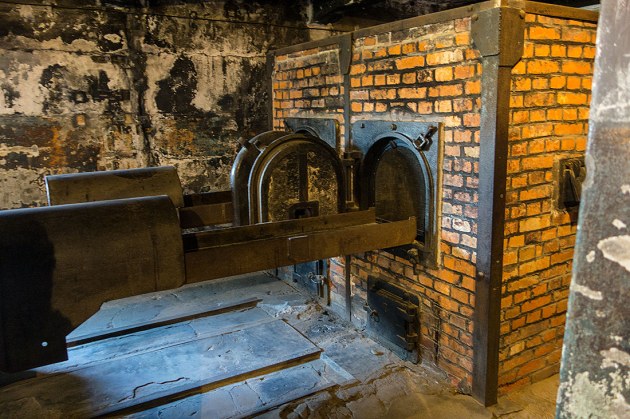 The crematorium at Auschwitz. 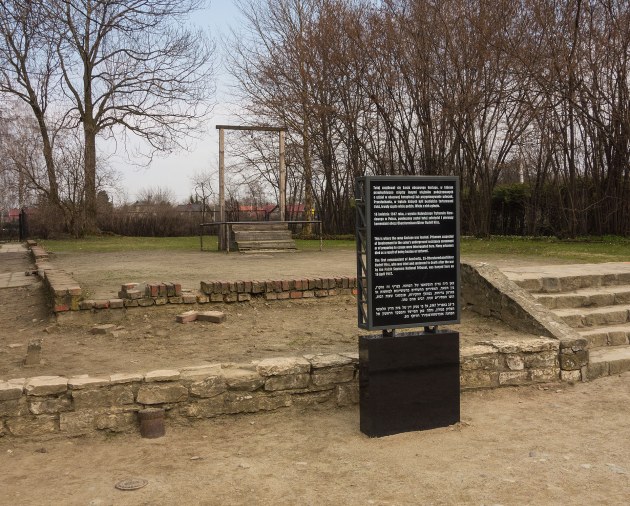 The gallows where Rudolf Hoss, the commandant of Auschwitz, was hanged in April 1947.

After the Auschwitz part of the visit is completed visitors are bussed to the Birkenau complex which is about 5 minutes away. This is where most of the killing was done, where prisoners were sorted into two groups when they disembarked from the cattle wagons that brought them to this dreadful place – one group comprising those who were fit to work, the other – children, pregnant women, old and infirm people. The former were sent to the wooden barracks while the latter were immediately marched to the gas chambers.

The Administration Block at Birkenau.

The final destination of prisoners  – the rail head at Birkenau. 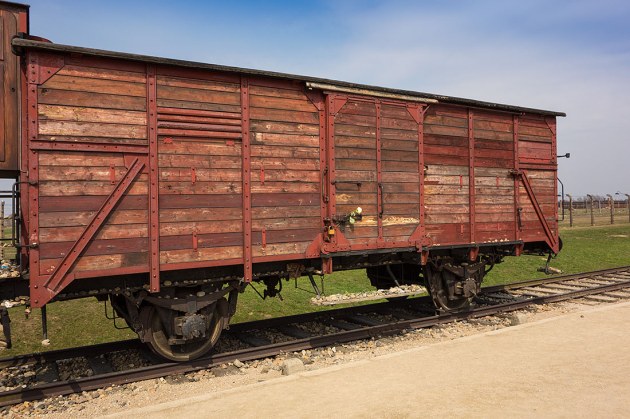 A cattle wagon of the type used to transport prisoners from around Europe. There were no sanitary facilities and prisoners, 150 to a wagon, could only breathe through the tiny airholes. They were kept locked in for the duration of the journey which could take up to 8 days in some cases.

Typical sleeping compartment in one of the Birkenau barracks. 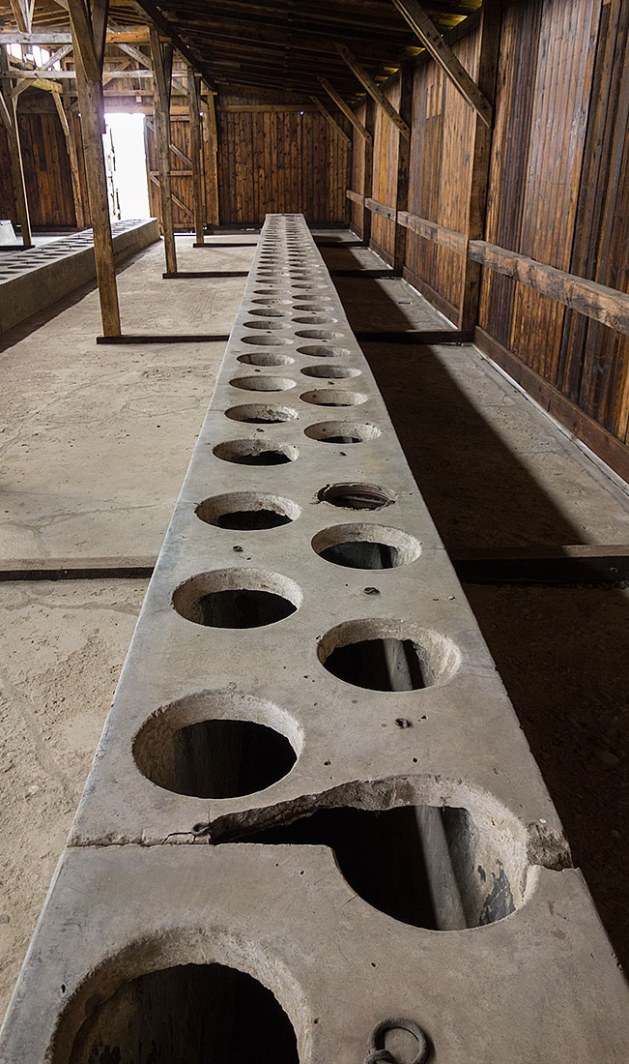 Communal toilets. The waste had to be cleaned out by prisoners. This was considered a choice job as it was indoors and out of the bitter winter weather.

The remnants of one of the Birkenau crematoria blown up by the Germans a few months before The Liberation. 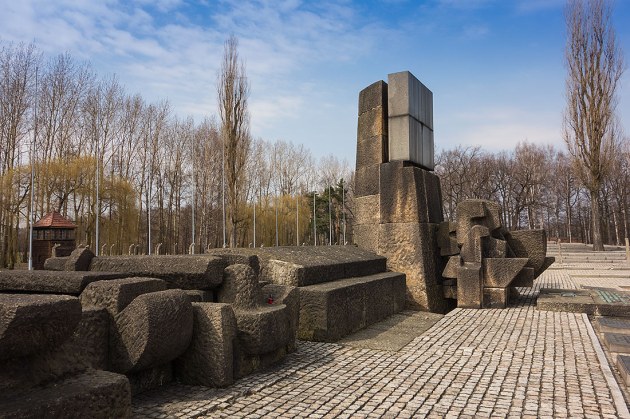 The memorial at Birkenau to those who died.

“FOR EVER LET THIS PLACE

Rest In Peace Czeslawa Kwoka and all the people who died here.