At the western end of the Black Valley in Killarney is a ruined cottage generally described as Drumluska Cottage after the townland it is in or, according to the local people, Kissane’s Cottage after, presumably, the last inhabitants. It has long been one of the “must photograph” places for Irish landscape photographers. I think I have a few Kodachrome 64 slides of it in my long-neglected slide collection, photos that I took back in the 1970s.

And it is easy to see why it is so popular: it is in a stunningly beautiful location and the combination of a ruined building fronted by a winding pathway and set off by a majestic mountain backdrop is too much to resist. You just *have* to shoot it even though you know as you you do so that your photographs will end up looking just like thousands of other photos taken over the years.

Veteran Waterford photographer Seán O’Brien told me an amusing story that illustrates that point: sometime in the 70s a fellow Waterford Camera Club member won first prize at the Southern Association of Camera Clubs inter-club competition with a colour print of the scene. At the time he shot it his wife photographed it using slide film and in the following year’s competition she entered it and won the colour slide section. This caused some rumblings of discontent from other competitors who suggested that the same original photograph was used for both competitions. The upshot of it all was that the Committee of the SACC ruled that the cottage could never again be entered in competition by the Waterford Camera Club!

This is my version taken back in February when there was still some snow on the upper slopes of the Reeks: 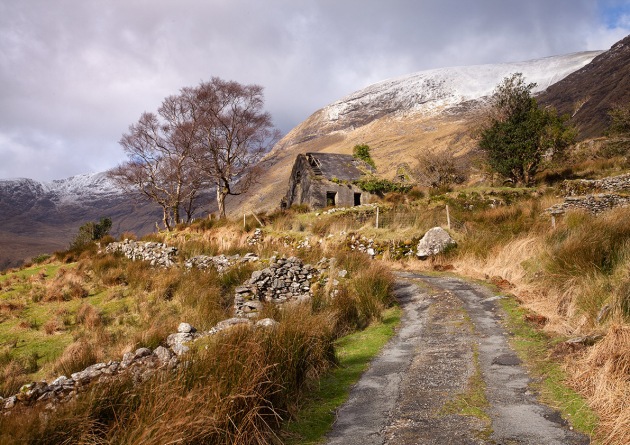 It’s pretty in a chocolate- box-cover kind of way, I suppose. However, for me, it has that indelible mark of cliché all over it. It’s just too familiar. So, for a bit of fun, I decided to replace the cottage with a modern residence and added a friendly looking woman to the scene: 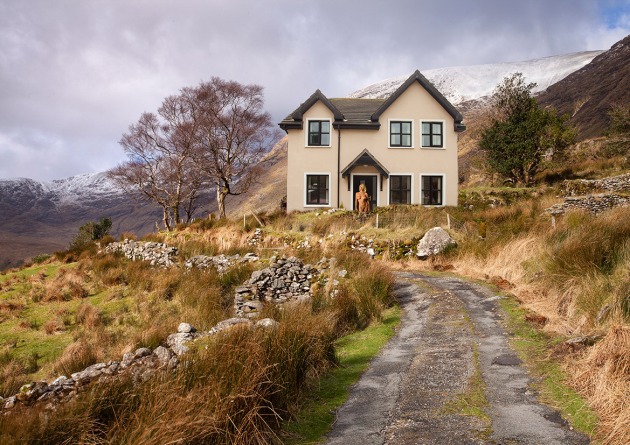 I think that’s a definite improvement!

Still, I shouldn’t mock it. It’s probably only a matter of time before some modern building will indeed be built on the site. In fact, I’m amazed it hasn’t happened already.

I doubt though if visitors will ever be met by such a fine looking resident.