This is an account of my Camino trip from 1st May to 7th May, 2015.  I have previously walked from Sarria to Santiago and from Burgos to Leon and I have written about those trips also on this blog (search under “Camino” if you’re interested). Click on the photos for full size.

I closed the door gently behind me and stepped into the chill night air. 4:55 am. Two hours before sunrise. The Camino path was just around the corner and the way was lit by the streetlights of Los Arcos. In a hundred yards or so I was into the dark countryside. As bright as the moon was, I needed my head-torch to see the way – it would be very easy to miss one of the Camino markers. The night was still. As soon as I was well away from the lights of the town I stopped and turned off the torch so as to savour the sounds and sights of this part of rural Navarra. A dog was barking somewhere in the distance. A few birds were singing in the fields – which surprised me given this early hour. A car passed on a nearby road. The contours of the land were easily discernible thanks to the nearly full moon. Flashing lights on the horizon marked a line of wind turbines. The lights of Sansol, the next town 7kms away, were due west of where I was. Of humans, fellow Peregrinos, there was no trace. I was alone. 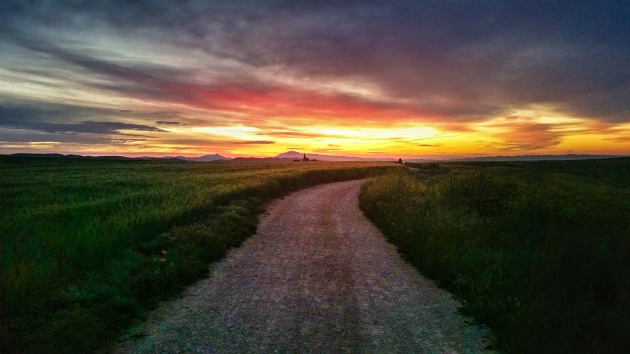 Dawn on the Camino

Looking at the night sky and seeing the land by the light of the moon is something I like to experience at least once during my Camino treks. I like to get out early when few others or none are about and then walk into the light. The symbolism of doing so on this ancient pilgrimage route is obvious but I just enjoy the sense of wonder and awe that it produces. But enough. I had to press on. This was my last day of walking and I had 30 kilometres to go to get to my final destination – the city of Logroño.

Six days previously I had set out from St Jean Pied de Port on the French side of the Pyrenees. The morning had been overcast but visibility was good as I made my way up the paved road towards the hostel at Orisson where I would stop for breakfast. Even though the highest point of the Route Napoleon over the mountains – the Col de Lepoeder – is 1,450m there is a gentle enough ascent: the steepest part, such as it is, is between the Huntto and Orisson hostels. It really is no big deal and it is on a paved road for most of the way. Forget any images you may have of scrambling up a steep mountain. 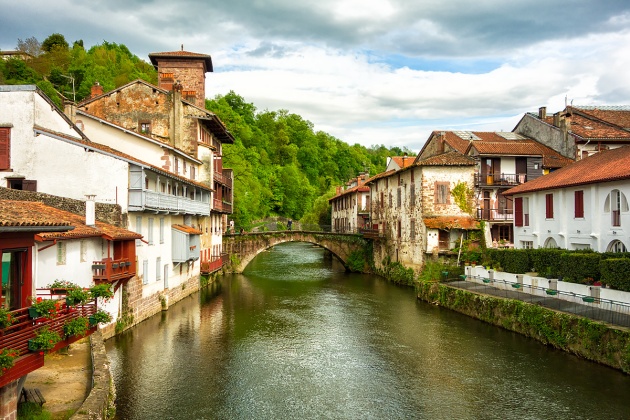 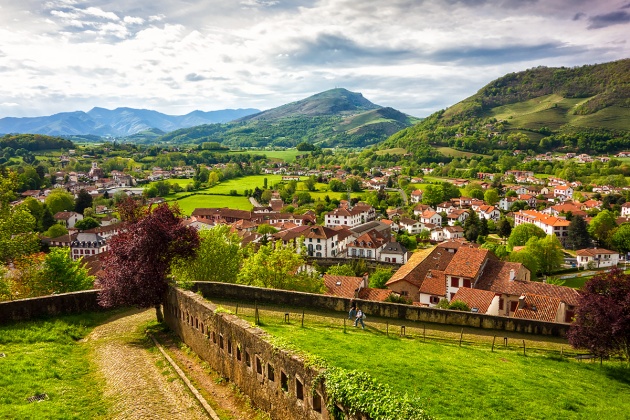 However, about 30 minutes beyond Orisson the weather turned bad: a gale force headwind began to blow and rain became torrential. As we ascended it became colder – there were traces of snow in places – and the walking conditions were miserable. All one could do was struggle on at an angle of 45 degrees into the wind and rain and grit one’s teeth with determination to get the hell over the mountain as quickly as possible and down the other side to Roncesvalles. Again, to emphasise the point, these were conditions that would have seen a mountain climb at home abandoned for fear of falling or getting lost but there was no such danger here (the way was well marked at all times) – it was just very uncomfortable. 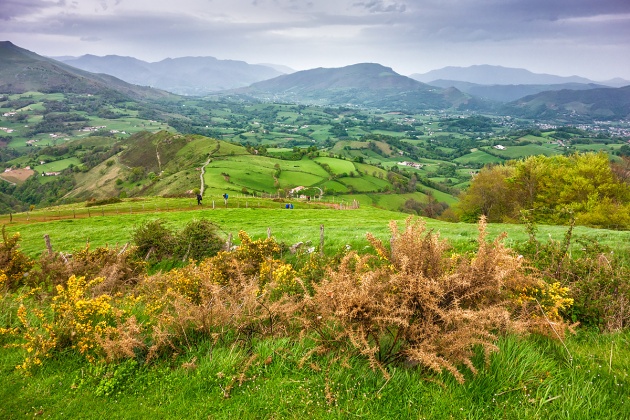 On the ascent out of St Jean Pied de Port 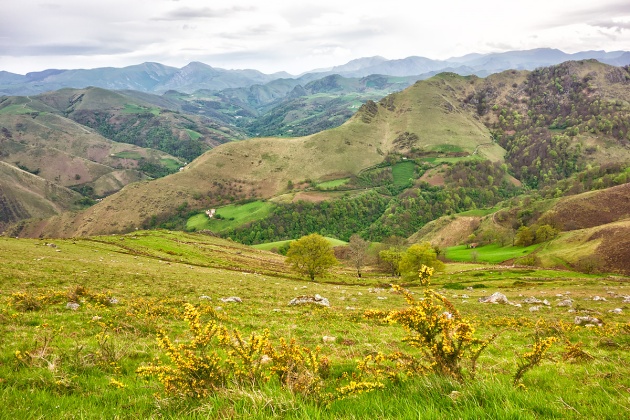 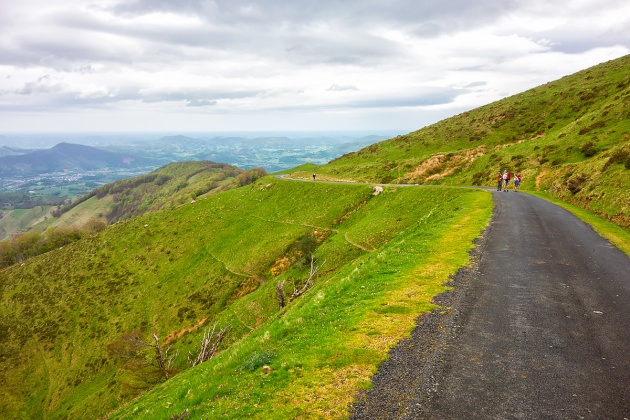 Looking back just before the bad weather struck. 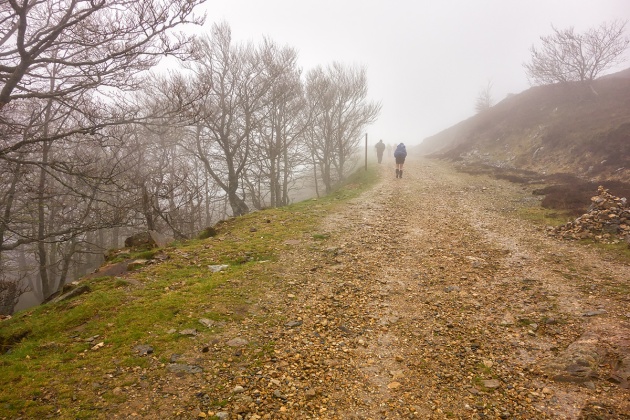 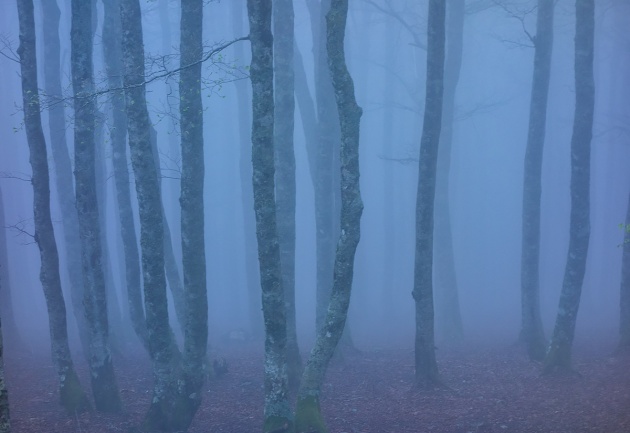 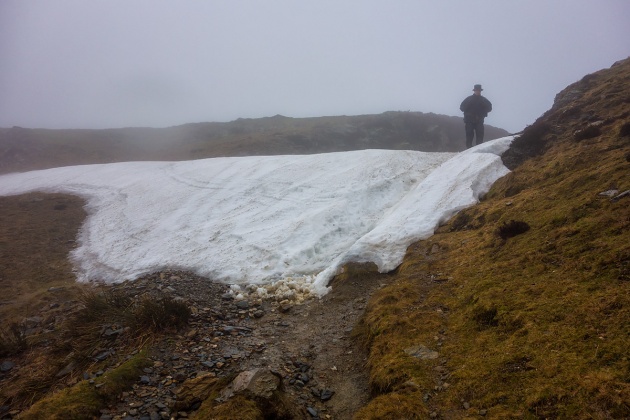 A clump of snow on the summit

I was glad I had brought my walking poles this time. They provided much needed support on the descent down the muddy woodland path on the Spanish side. I had been hoping for a hot meal at one of the restaurants in the town but everywhere was full up so I continued on to Espinal, 6kms away, where I had booked a bed for the night. I was glad I had. The large albergue at Roncesvalles, I heard later, was packed out and people were even put up in converted shipping containers such was the demand for spaces. The hostel at Espinal, by contrast, had plenty of beds to spare. It may have lacked the camaraderie and sense of achievement that would have been in evidence in Roncesvalles but it made up for it in comfort and quiet. It had taken me 8 hours to walk the 32kms from St Jean Pied de Port which was pretty good going in the circumstances.

Happily, the weather cleared and the rest of the trip was calm and rain free. The next two sections – as far as Pamplona – were mostly through woodland with the path still sticky in places after the rain. The woods were beautiful with the trees wearing their fresh green leaves and the birds in full song. Near Zubiri a cyclist who had just passed me fell on an exposed bare rock section of the path as it descended towards the town and broke his leg. He had to be lifted out by helicopter. 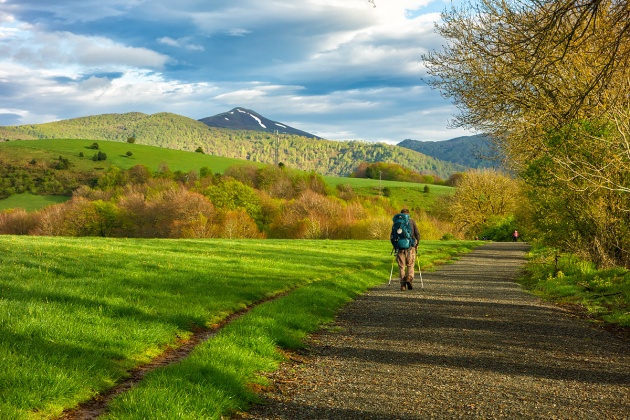 Brighter, drier conditions on the second day. Note the snow on the mountain in the middle distance 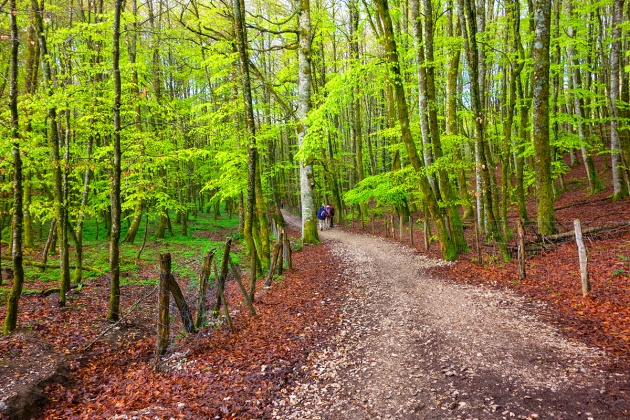 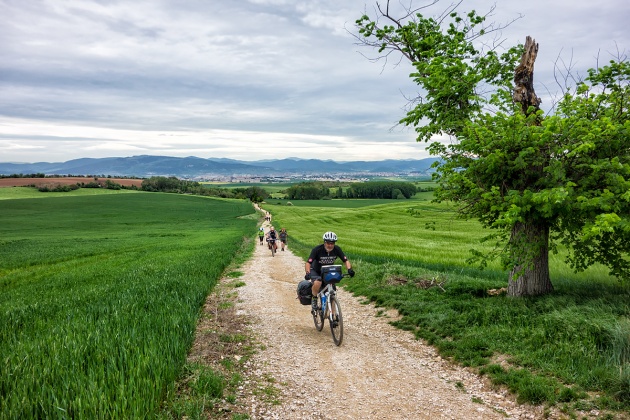 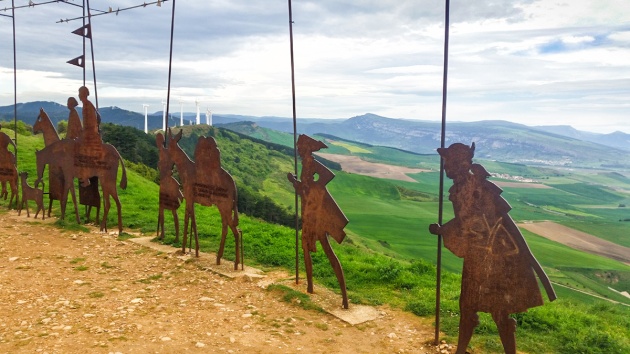 One of the iconic structures of the Camino, the Monumento Peregrino on the Alto del Pedrón – a series of natural sized iron figures representing pilgrims of a former age who would have done it on horseback or riding donkeys as well as on foot. 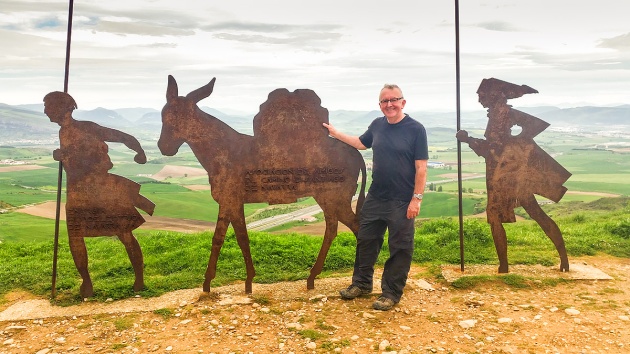 A  peregrino with donkey (the donkey is on the left)

After Pamplona the countryside opened out and from there on each day brought us through some of the most scenic parts of the Camino. Walking conditions were ideal – a cool breeze and mostly overcast with occasional sunshine. And, of course, as ever on the Camino – good company: as well as the scenery, the opportunity to meet interesting and amusing people from all over the world is one of the great attractions of the walk. I was astonished to find, in a hotel in Puente La Reina, an old schoolmate of mine whom I hadn’t seen for over 40 years. He was walking with his wife as far as Estella, had heard about me from other Irish people whom I had met on previous days, and approached several men in the hotel asking them if they were me – I have changed over the years after all  – until he found me. It is indeed a small world. 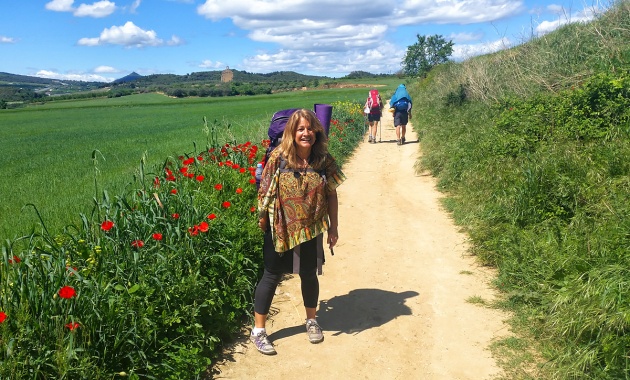 One of the most remarkable women I met – Texan woman Leigh Ann Peters who lives in Colorado has taken a year out to backpack around the world and has been travelling since last November. After doing the Camino she intends to travel around Europe and then on to South America before returning home for her son’s wedding in October 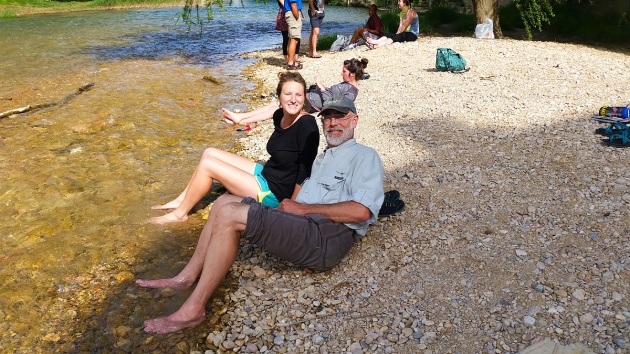 San José, California man Greg with a fellow American girl cooling their feet in the river at Estella 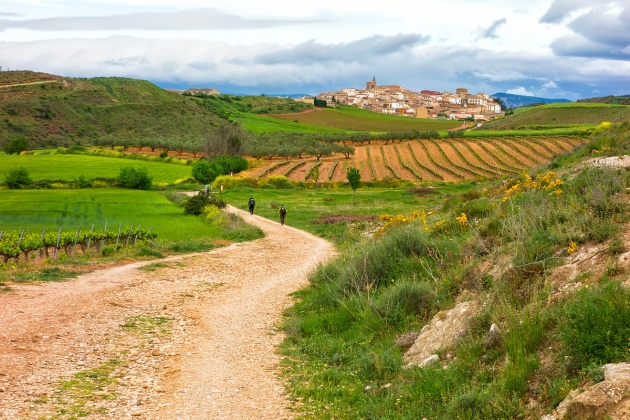 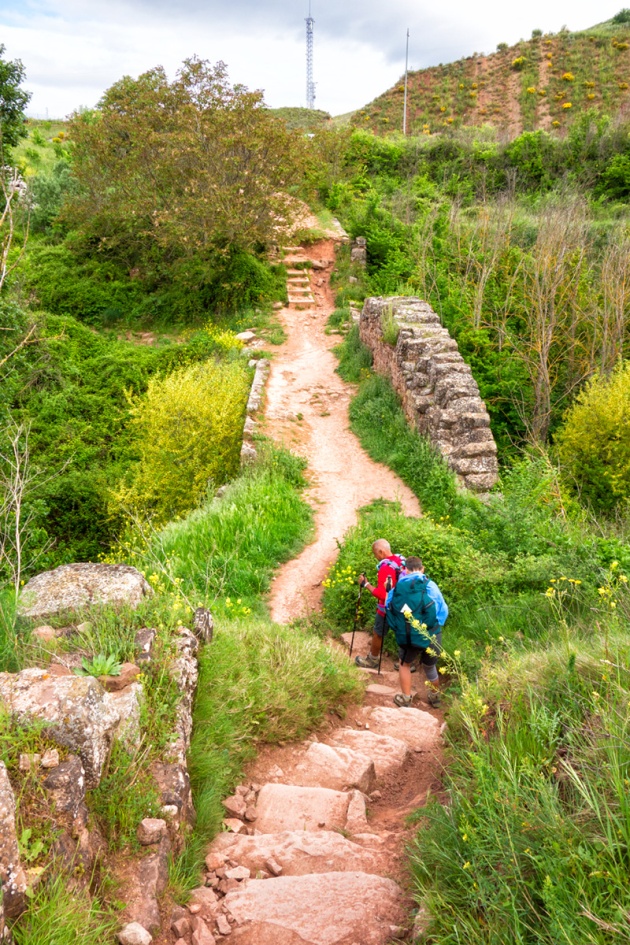 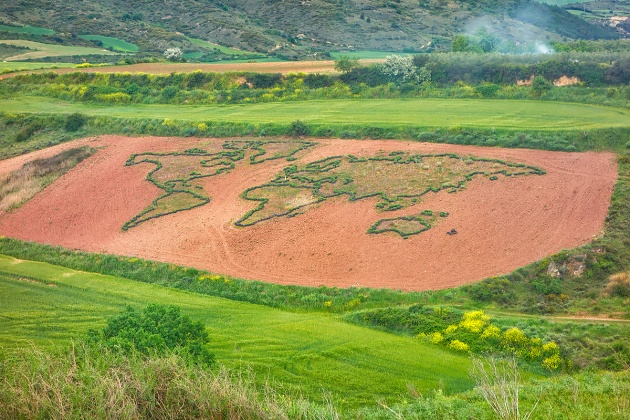 An elaborate map of the world in a field 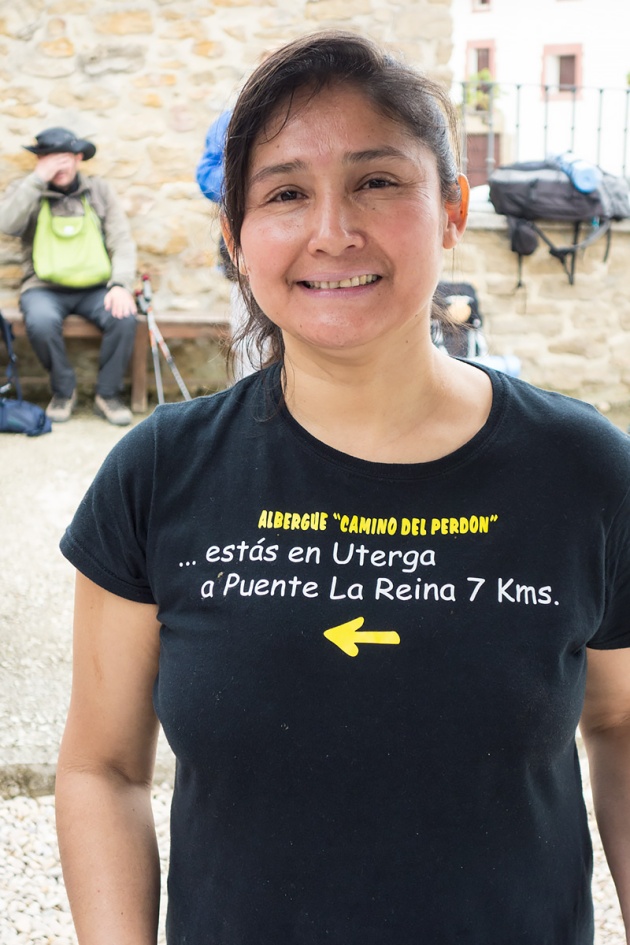 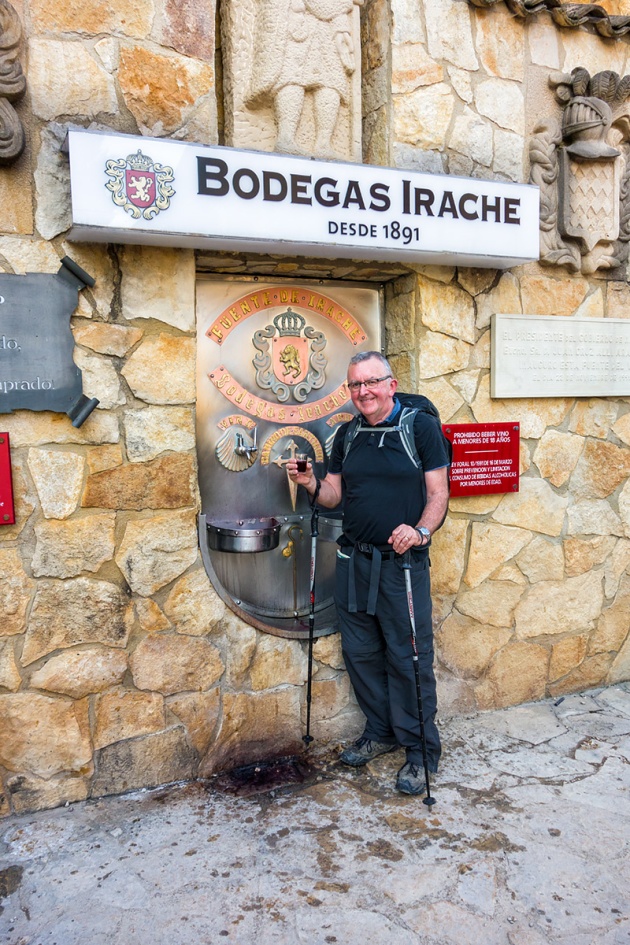 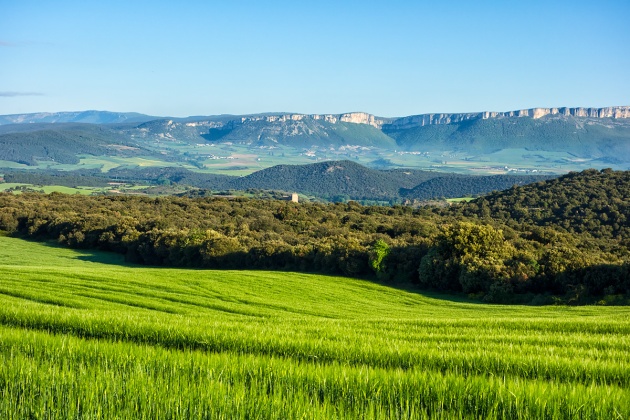 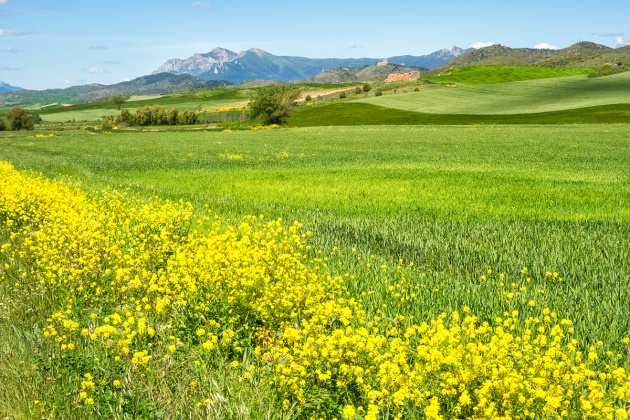 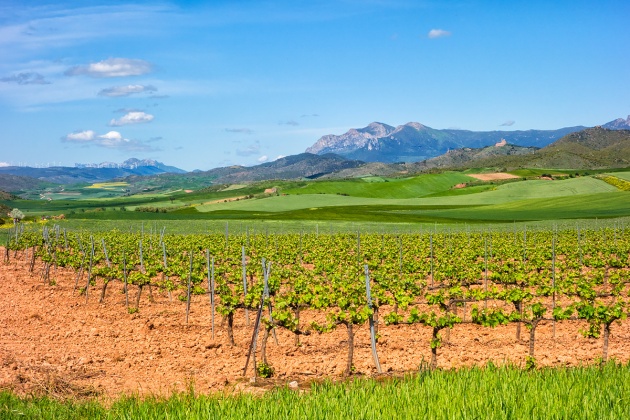 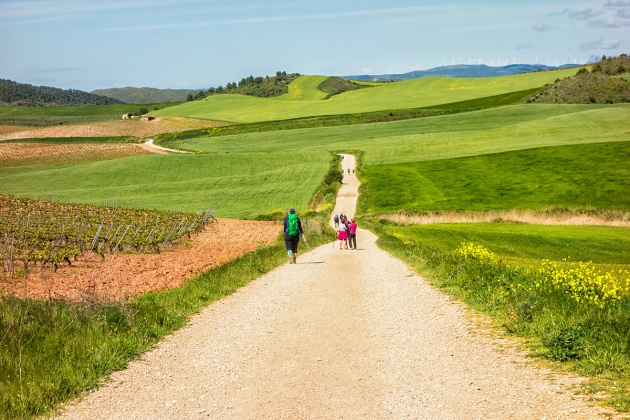 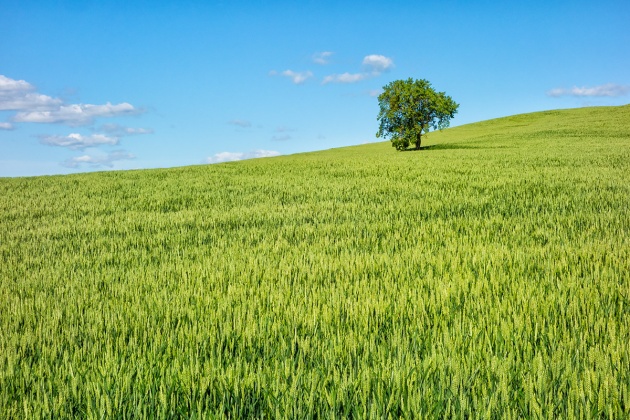 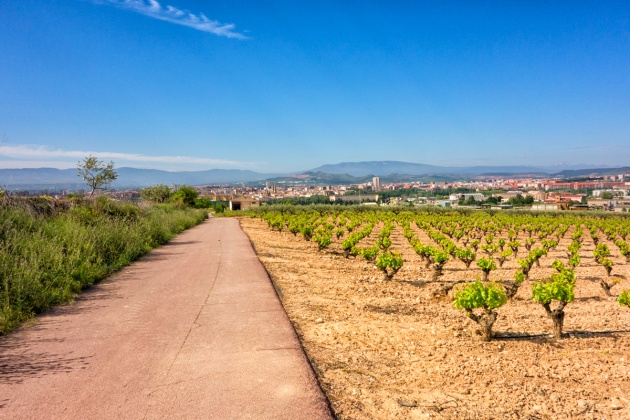 But now, here I was, alone in the pre-dawn heading towards Logroño. The towns of Sansol and Torres del Rio were asleep as I passed through and in the absence of any open restaurants I breakfasted, on the hoof, on my energy bars and orange juice. By the time I got to Viana people were up and about and I had coffee and a tortilla in a little café in that picturesque place. Then it was time for the final push towards Logroño and just before the city I passed from Navarra into La Rioja with vineyards producing that excellent wine in abundance all around. As I sat in one of the city’s plazas I contemplated the finish of another Camino section, the people I had met, the beautiful country I had passed through and I looked forward to doing another one next year.