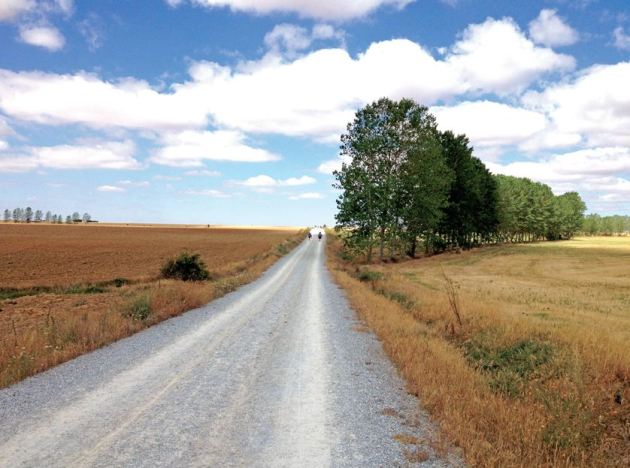 Walkers on the Camino – photo courtesy of Scott Connolly

I had been thinking about doing a section of the Camino de Santiago for the last year or so. A friend of mine, Rita Scannell, did most of the forty-day Camino de Francés last year – from St.Jean Pied de Port in the Pyrenees to Santiago de Compostella, the terminal point for all the Camino routes. Reading about her progress on Facebook prompted me to give a portion of the walk a try and I had early 2014 in mind.

Then, a few months ago, a Twitter contact, Rosaleen Fitzgerald (@clonrf), did the 115km section from Sarria to Santiago and she tweeted about it. I was walking in Youghal one day shortly afterwards and Rosaleen’s observations on the trip came into my mind. About five minutes later I bumped into an old schoolmate of mine, Liam Cooper, a  man I hadn’t seen in more than twenty years. Within the first few minutes of our meeting he mentioned, out of the blue, that he did the Camino last year. What a coincidence! (Or maybe an example of Jungian synchronicity?)

The following week  I attended a First Communion ceremony in Dennehy’s Cross Church in Cork City. I spotted an item on the noticeboard in the doorway: “Next Thursday, A Talk on the Camino by David Clifford in the Church Crypt”. The coincidences were piling up! I came to the conclusion that I was meant to do the Camino. It was definitely in my future. There were too many signs for me to ignore it.

The talk by David Clifford made up my mind. He has done the Camino several times and by different routes. Last year he did the Via de la Plata, the 1,000km trek from Seville which takes 6 to 7 weeks to complete. His excellent slide presentation of photos taken en-route and useful advice as regards how much and what to carry etc., led me to decide there and then to do it, and to do it this year, not next. When I got home I booked the flights (Dublin/Santiago) for September and a hotel in Santiago for the last two nights.

I don’t have forty  days to spare for it though and so I’m just doing a short section, the 115 km stretch from Sarria to Santiago. I’ll be away for just a week and will be walking for 5 days with the average daily walk taking about 6 hours. Very much a Camino-lite then in contrast to Rita’s and David’s full-on treks. Maybe next year.

The section from Sarria to Santiago

And I’m walking on my own which is also recommended. Experts such as David say you should avoid walking in a group at all costs – the fast walkers will be annoyed at having to slow down to let the slower ones keep up and the slow ones will feel under pressure to keep pace. Besides, part of the attraction of the Camino is meeting other people and walking a part of the road with them as they tell their stories.

I don’t have any doubts about my ability to do it. I’m in good physical condition and I enjoy walking and hill-climbing. Still, I’ve started to increase my daily walking routine to about two hours per day with two four-hour walks per week. My walking speed on the flat is 6.4 kms (4 miles) per hour which is not bad. (A useful app for keeping track of your walking distances and times is RunKeeper.)

Photos from the RunKeeper app of two favourite routes of mine – one from Killeagh to Youghal and back and the other around my home place of Carrigtwohill. Both avoid busy  main roads for the most part.

I should certainly be well prepared come September. One of the biggest problems walkers on the Camino have is blisters. I figure that regular walking at home before you go and having your walking shoes well run in should minimise the risk of getting them. Still, I’ll be packing the Compeed just in case. (Liam, my schoolmate mentioned above, recommended Merrell hiking shoes and I bought them. They are on the expensive side – I paid €145 – but shoes are probably the most important part of your kit so it’s as well to get a good pair. Avoid the bargain offers in Lidl and Aldi! I have a pair of good Brasher mountain-walking boots but hiking shoes rather than boots are better for the Camino.)

There is a wealth of information on the web about the Camino. David Clifford recommended two sites in particular: http://www.mundicamino.com/ingles and http://www.godesalco.com/plan (for downloading the route to a smartphone).

The guidebook for the Camino de Francés that everyone recommends is John Brierley’s “A Pilgrim’s Guide to the Camino de Santiago” and it is easy to see why – it is packed with helpful information for every stage of the walk.

Another book just published is “The Dance of Christian Life – Reflections on the way to Santiago de Compostella” by Scott Connolly. Scott is a Catholic priest in the Archdiocese of Seattle and in 2012 he did the full forty-day Camino de Francés. He kept a journal each day and took numerous photos with his iPhone. He was convinced by Rita – who he met on the way – and others to publish his journal and photos as a book and it is a sumptuous publication. It was designed by Rita and printed by Watermans of Cork. As the title suggests, it is informed by a deep religious belief – he is a priest after all! – but it will be of interest to anyone who either has done or is thinking of doing the walk. It is full of interesting and funny anecdotes. He set out each day with a carefully chosen scriptural verse to inspire him but also used the music of Rhianna, Madonna and Jennifer Lopez to put a pep in his step! 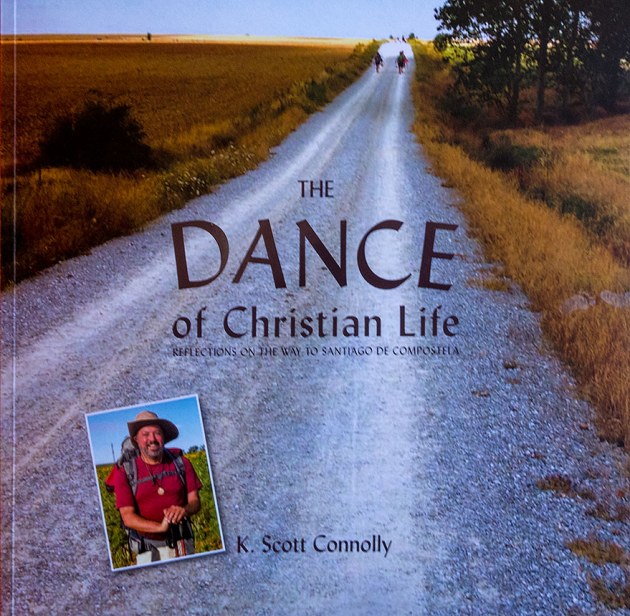 The cover of Scott’s book – check out that cool hat!

All proceeds from the book will be donated to a new Cancer Center in Scott’s parish of Bellingham, Seattle. Not only is it great value for the minimum suggested donation of €20 ($25 in the States), the money will be going to an excellent cause. It has a limited print run however and is expected to sell out quickly. A small number of copies are available in Ireland through Rita Scannell and she can be contacted at 0876823498 or at ritascannelldesign@eircom.net . In the US you can buy it by PayPal from this link:

Scott’s purpose in doing the Camino was a specifically spiritual one – to renew his vocation to the priesthood and to his vocation as Pastor of the parish he serves. Why am I doing it? I’m simply looking forward to the challenge – such as it is (I’m already feeling a certain regret that I didn’t sign up for a  longer walk) – and of trekking in the beautiful Galician countryside.

I’m looking forward to meeting other pilgrims on the way and of listening to their stories. I like the fact that the Camino is more than just a long-distance walk. It is primarily a pilgrim route and has been for hundreds of years.

I like the fact that something that should be an anachronism in the modern age is increasing in popularity every year. This isn’t evidence of some religious resurgence of course – people of every religious persuasion and none do it – but it does betoken, I think, something beyond the mere long-distance physical challenge.  John Brierley in his book urges readers to find a spiritual purpose for taking the journey, whatever form that spirituality may take. David Creedon talked about the different mental mode he finds himself in, how after a week or two he finds himself living fully in the now and how liberating that is. Alas, my short week is unlikely to result in such enlightenment but I have every confidence nonetheless that I will find it a richly rewarding experience in ways that will probably surprise me.

12 thoughts on “Preparing for the Camino”